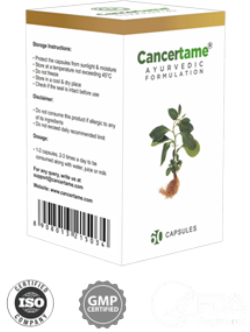 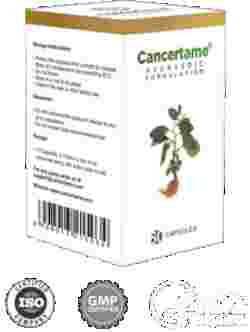 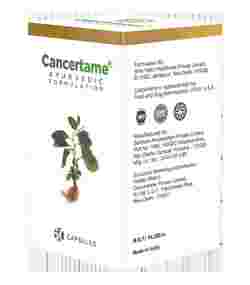 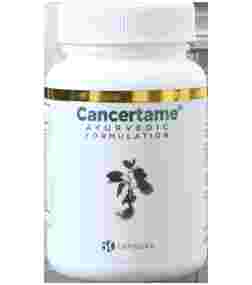 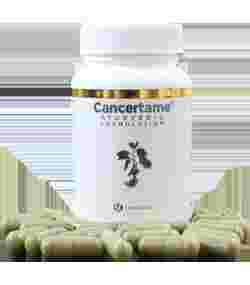 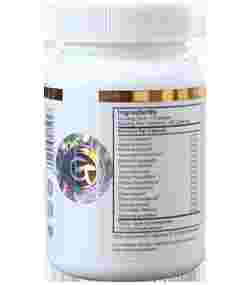 Cancertame was formulated by Sino Vedic Research Centre, after extensive research over a period of more than two decades, and approved by Ministry of AYUSH under product code Ay/Sanjivan/22637. We identified more than 450 anticancer herbs and shortlisted 15 herbs having DNA repairing, anti-mutagenic, anti-tumourangiogenic, proapoptotic, immunoenhancing, radioprotective, chemoprotective and anti-stress properties to develop Cancertame Ayurvedic Formulation that helps to fight cancer without side effects.

What is Cancertame & what certifications does it have?

Cancertame is a broad spectrum, over the counter medicine for cancer which helps to fight the growth of cancer as well as helps to reduce the side effects of chemotherapy and radiotherapy. Cancertame is made in India and has ISO Certification, GMP Certification & is registered with the Food and Drug Administration (FDA), U.S.A. Cancertame is approved for manufacturing by Ministry of AYUSH under Product code Ay/Sanjivan/22637

In which type of cancer patients is Cancertame beneficial?

Cancertame is beneficial in most types of cancer and is even useful in those cancer patients who have become resistant or refractory to chemotherapy, radiotherapy and hormone therapy, and for those who are not fit for surgery, chemotherapy and radiotherapy due to old age, marked weakness or any other factor such as kidney failure, liver dysfunction and cardiac insufficiency. Cancertame is highly recommended in those patients, in whom cancer is detected in advanced stage and conventional treatment including surgery, chemotherapy or radiotherapy is not possible.

How much time does Cancertame usually take to tame cancer?

Cancertame is NOT a Magic Cure or Miracle Drug. Cancertame usually takes about 3 months to arrest the further progression of cancer and thereafter starts regressing the size & activity of cancer.

How does Cancertame help to fight all types of cancer?

One thing is common in all types of cancer and that is mutations in the growth regulating genes including oncogenes and tumour suppressor genes (segments of DNA). Such mutations are a result of damage to the DNA by exposure to cancer causing agents, known as Carcinogens. Cancertame promotes DNA-repair mechanism and tames aggressive cancer cells by inhibiting mutations in the genes, which are responsible for genesis and growth of cancer. Cancertame re-induces the lost process of apoptosis (programmed cell death) in cancer cells and inhibits tumour-angiogenesis (ability of cancer to create its own blood vessels for nutrition). Cancertame also helps to fight cancer by blocking certain cancer promoting enzymes and hormones. Cancertame prevents seeding, micrometastases and metastases by reducing the adhesive capacity of cancer cells to the endothelial lining of lymphatic and blood vessels. Cancertame also enhances the immunity of the body that helps to fight all types of cancer. Cancertame Ayurvedic Formulation helps to fight cancer at every step, i.e. Genesis, Growth and Spread of cancer.

Why should I prefer Cancertame, an Ayurvedic Formulation whereas majority prefer conventional treatment of chemotherapy and radiotherapy?

There is no conflict between Cancertame and conventional treatment. In fact, Surgery is the best option for cancer treatment when the tumour is in early stage and localised. Chemotherapy is a viable treatment for cancer in most of the cases but problem comes when the cancer cells become resistant to chemotherapy. Similarly, radiotherapy has its own limitations. Moreover, chemotherapy and radiotherapy do have toxic side effects.

Ayurveda is trusted and proven system of medicine since more than 5000 years. A team of doctors and scientists has been working to identify various anticancer herbs having DNA repairing, anti-mutagenic, anti-tumour-angiogenic, pro-apoptotic, immune-enhancing, radioprotective and chemoprotective properties. We identified more than 450 anti-cancer herbs over a period of 30 years and prepared Cancertame Ayurvedic Formulation from the extracts/active principles of selected anticancer herbs. Cancertame Ayurvedic Formulation fights cancer by inhibiting growth and spread of cancer without side effects. This can be taken alone or along with conventional treatment such as surgery, chemotherapy, targeted chemotherapy, radiotherapy, cyber knife, gamma knife, SRS (Stereo-tactic Radiotherapy), photo dynamic therapy, hormone therapy, immunotherapy or any other alternative treatment for cancer.

Does Cancertame help in reducing the side effects of chemotherapy, hormone therapy and radiotherapy?

Cancertame has chemoprotective, radioprotective and immunoenhancing properties that help to reduce toxic side effects of chemotherapy, hormone therapy and radiotherapy including nausea, vomiting, diarrhoea, loss of appetite, loss of hair, loss of taste, loss of smell, hepatotoxicity, nephrotoxicity, cardiotoxicity, neurotoxicity, bone marrow suppression and many other life threatening complications.

Do I need a doctor's prescription to buy Cancertame?

Cancertame does not require a medical prescription as it is an over the counter (OTC) medicine but we appreciate each patient talking to their oncologist about Cancertame and making the right decision as per their condition.

It is highly recommended to contact our Doctors Team at doctors@cancertame.com to determine the recommended dosage of Cancertame in each case for timely treatment under supervision of Registered Medical Practitioner. For most of the cancer, the following dosage is to be followed:

*Note: Dosage for Children below 10 years is half of the Recommended dosage mentioned above 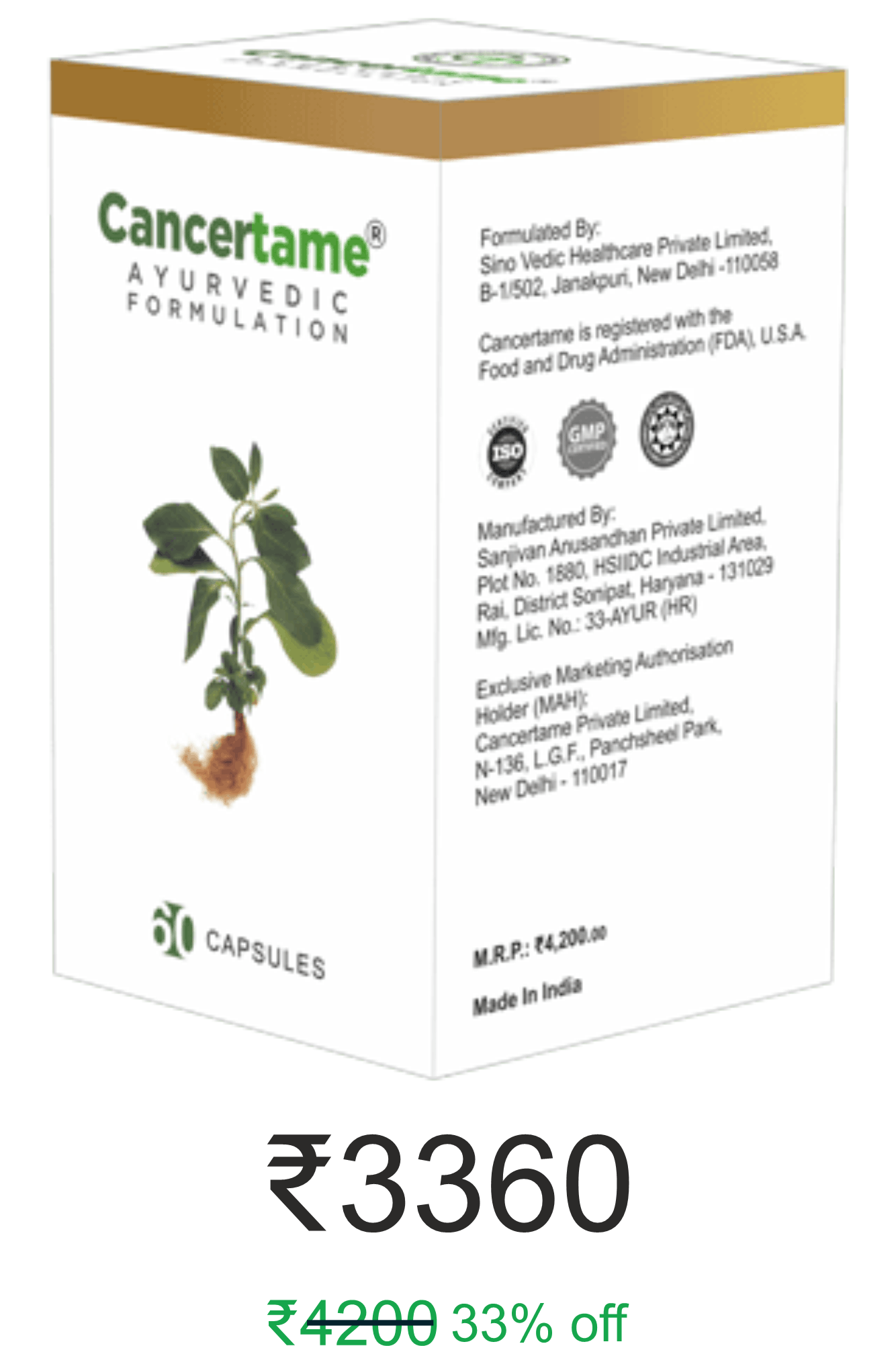 Read our latest articles & news to stay updated about Cancertame

Check all Authorised Sellers of Cancertame throughout India

Watch our guide videos to learn how to order Cancertame, how to login/signup, etc. 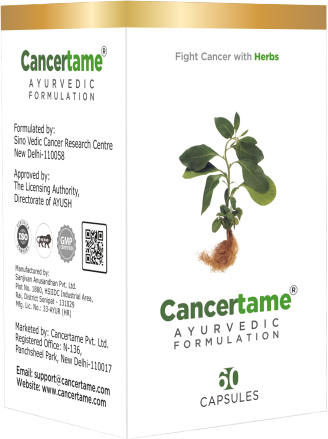