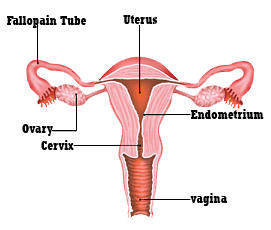 Carcinoma of the cervix is the most common cancer among women in developing countries. Squamous cell carcinoma arising from squamocolumnar junction of the endocervical canal constitute about 85 per cent of the cervical carcinomas. Carcinoma of the cervix occurring during the childbearing age usually remains confined to the intraepithelial layers, whereas in the elderly women, it is invasive in character. Risk factors include smoking, chronic cervicitis, cervical dysplasia, human papilloma virus infection and the multiparity.

Staging of the cervical carcinoma is done as follows:

Procedures used in diagnosis of the cervical carcinoma include Pap test, Schiller test, colposcopy, dilatation & curettage (D&C) and biopsy. All women above the age of 35 years are advised to undergo Pap test every year to detect cancer of the cervix. This is a simple test, in which microscopic examination of the cervical cells is conducted. The Pap test was developed by George Pappainecolau of Cornell University in 1928 and has been extensively used since 1943. This test has already saved the lives of thousands of women throughout the world.