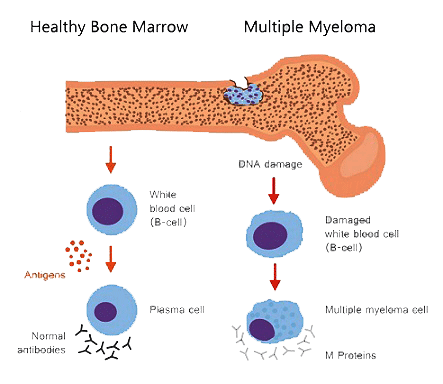 Multiple myeloma is a cancer of plasma cells in the bone marrow. It usually occurs above 50 years of age. Multiple myeloma may remain asymptomatic for many years. The most common symptom of multiple myeloma is a pain in the ribs or the spine due to infiltration of the malignant plasma cells into the bone. The proliferation of malignant plasma cells in the bone marrow forms multifocal lytic lesions throughout the skeletal system causing pathological fractures. Other symptoms include anaemia, lethargy, fatigue, leucopoenia, thrombocytopaenia, recurrent infections, generalised lymphadenopathy, hepatomegaly and splenomegaly. There may be bleeding tendencies such as epistaxis, haemoptysis and haematemesis. Production of para-proteins (Bence Jones protein) may lead to hyperviscosity syndrome and renal impairment. Hypercalcaemia may lead to clouded consciousness, headache and blurred vision. Sometimes, the malignant myeloma presents as a solitary tumour known as 'plasmacytoma' in the bone or soft tissue. Plasmacytoma in the spine may cause compression of the spinal cord leading to certain neurological disorders.

Staging of multiple myeloma is done as follows: