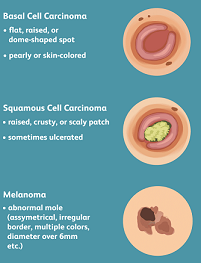 Basal cell carcinoma of the skin

Squamous cell carcinoma of the skin

Staging of the malignant melanoma is done as follows:

Staging of the malignant melanoma is also done by Clarkâ€™s level: