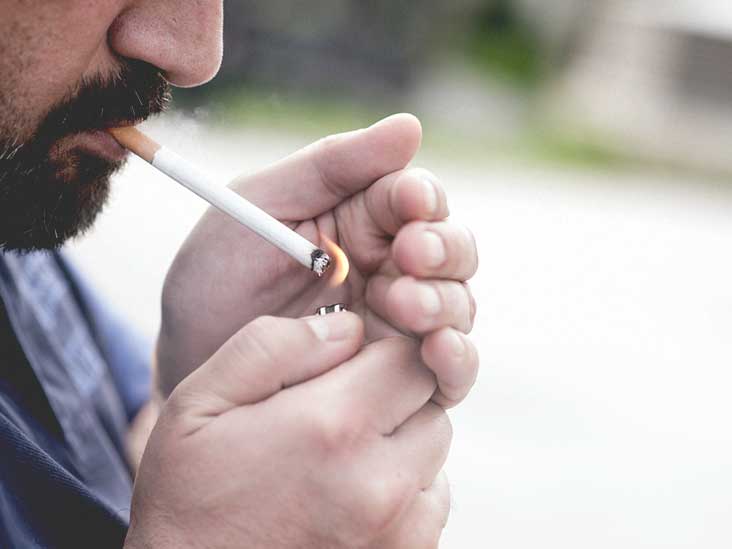 Tobacco smoking creates the most favourable conditions in the body for genesis and growth of cancer. It provides many carcinogens, toxins and free radicals as well as creates deficiency of antioxidants and suppresses immune system of the body. Tobacco related cancers account for more than one third of the human cancers. Tobacco smoking & chewing may lead to cancers of the mouth, throat, vocal cord, lung, stomach, pancreas, kidney, bladder, cervix and the blood. India has the highest incidence of oral cancers in the world due to wide spread habit of tobacco chewing. Even the non-smoking persons living in vicinity of the smokers, known as the passive smokers, are not spared from carcinogenic effects of the tobacco smoke. About twenty percent of cancers of the lung occur due to the passive smoking.

Tobacco smoke generates more than 2000 chemical compounds, most of which are carcinogenic. The level of carbon monoxide in tobacco smoke is eight times higher than the maximum permissible limits. Tobacco smoke contains nicotine, which is not only addictive but also one of the major cancer promoters. Tobacco tar contains certain hydrocarbons including nitrosamines, benzene and benzopyrene, which are the major carcinogens. Benzopyrene damages the tumour suppressor gene, the p53 gene, in cells of the lungs that leads to cancer. Tobacco tar also contains radioactive compounds such as potassium-40 and radium-226 that have carcinogenic effect.

The cigarette smoking generates free radicals in the body that promote growth of cancer. The antioxidants, present in the body, normally neutralise these free radicals, but smokers have much lower levels of vitamin C and other antioxidants in their blood. The activity of the natural killer cells (NK cells) is also suppressed in the smokers that further enhances the risk of cancer.

Smoking is a learned behaviour that is usually adopted at a younger age. Once trapped, the person is likely to continue despite the feeling that he or she can give it up because the tobacco smoker easily becomes physically and mentally addicted to it. By the time the smoker develops craving it becomes a true addiction. A smoker's craving may be as strong as that of the heroin addict. Most of the tobacco smokers think that the smoking helps to concentrate and overcome the lack of confidence and boredom. The most common excuse for a person to smoke is the perception that it relieves stress. Most of the smokers think that the smoking tranquillises a person, unaware of the fact that it has just the opposite effect because it makes the person more tense by increasing the pulse rate and blood pressure.

Leukoplakia is a white thickened patch, usually appearing in mucous membrane of the oral cavity in tobacco-chewers and smokers that progresses to form cancer. If the person having leukoplakia stops tobacco-chewing and smoking, the patch may not develop into cancer, instead, it may gradually revert back to a normal tissue.

It has been observed that the risk of cancer drops considerably after quitting smoking, for which a firm determination is required. Most of the smokers, who like to give up, may succeed initially, but ultimately only about twenty percent of them, are able to quit smoking permanently. The effort may not yield any result, unless the conditions that inspired the person to start smoking have been altered. The best time to quit smoking is during an illness, when the natural desire to smoke is reduced remarkably. The withdrawal symptoms of smoking include lethargy, headache, sore throat and weight gain, most of which are temporary and disappear within a fortnight.